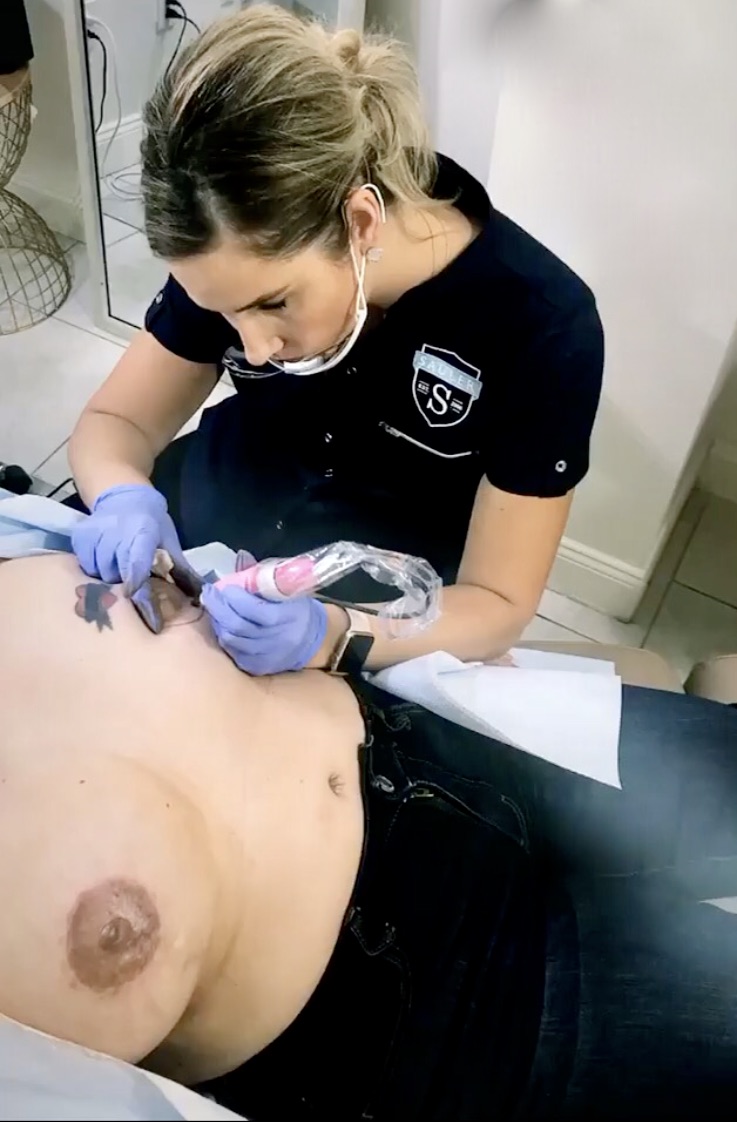 Micropigmentation, popularly known as permanent makeup (PMU), is most commonly used for cosmetic enhancements. But did you know that it can also be used to restore a breast cancer survivor’s areola after surgery? This is just one example of how permanent makeup is used for medical purposes and it’s called Paramedical PMU. It can also be used to cover or camouflage other types of skin conditions and post-surgical scars.

As you might have guessed by the name, paramedical tattooing involves implementing pigment into the skin, just like in eyebrow microblading, to restore or enhance the appearance of your breasts. It’s a great way to restore not just your nipples but also your confidence after a mastectomy and other types of breast surgery that could cause discoloration or fading of areolas. While it cannot physically bring back your areola, “tattooing” pigment with advanced 3D techniques make it look astonishingly realistic! The same is done on medically-related scars.

It is a practical alternative for those who do not want to undergo yet another surgical procedure in order to feel whole again.

How Does Areola Re-Pigmentation Work?

You will hear different terms for this procedure from different permanent makeup establishments. It is commonly known as areola restoration since it practically recreates one or both areolas or nipples. That’s why you will also hear terms like “simulation”. While you will not feel the original texture and bumps on your nipple area, you will be amazed at how micropigmentation can create a 3D effect of protruding nipples, by using pigments that mimic the shadows, patterns, roughness, and smoothness that match your original one.

How Does It Cover Post-Surgical Scars?

Similarly, paramedical PMU can effectively cover or camouflage body or facial scars by masking them with the missing pigment on the damaged area. Your artist will determine the pigment or combination of pigments to make your skin look more balanced and even. In cases where it cannot cover the entire scar, the procedure can significantly reduce its appearance which cannot be achieved even with sophisticated laser treatments or plastic surgery.

It uses a specialized PMU machine to blend the pigment in the scar and the surrounding skin to essentially “hide” or camouflage it. For this to be effective, you need to make sure that you choose a highly-experienced permanent makeup artist who is very familiar with matching the right pigment with skin tones.

Depending on the size, shape, and texture of the scar, you may need to undergo only one or multiple procedures. Your body part’s renewed appearance has a lasting effect that can benefit you for a lifetime. See pricing

How Would My Scars or Nipples Look Like After Paramedical PMU?

In eyebrow microblading, the artist deposits hair-like strokes of pigment into the brow area to make the brows look extraordinarily NATURAL. Instead of individual hair strokes, areola re-pigmentation uses a combination of stippling (repetitive dots of pigment), lines (to draw in the circles and other shapes), and lighting and shading, to recreate the natural bumps, shadows, and the very texture of your areola. The artist will use a variety of pigment shades and colors to achieve this 3D or realistic effect.

Scar and medical mark camouflaging, similarly cannot restore the damaged tissues in the affected area. The results will not look exactly the same as your skin prior to the damage. However, it will look much smoother and even.

Who is a Good Candidate for Paramedical PMU?

Not everyone who has a scar or needs areola restoration is a good candidate for paramedical tattooing. Before you can undergo the treatment, it’s important that your scar or post-surgical marks have healed. Preferably, the scar should be a year old or, with the right conditions, it may be treated after six months. It should no longer appear pinkish and the color must have been stable for a while. If not, the micropigmentation procedure can further damage your skin. Remember that the treatment involves micro “incisions” even if it’s just in the skin’s surface layers and doing that in scars that are still relatively fresh can cause more scarring than healing.

Your scar must also be relatively smooth and flat. It can be difficult to retain the pigment on a scar that is too bumpy or raised. If that is the case, you may want to speak with your physician or a dermatologist to ask for a possible treatment that can improve your skin’s texture prior to paramedical tattooing.

All other limitations apply in various eyebrow microblading procedures.