Soon after microblading’s fairly recent popularity, a new treatment called Microshading is making waves. It’s the eyebrow enhancement more suited for those with oily or sensitive skin. If you’ve been intrigued by eyebrow microblading but soon found out that it’s not your best option, microshading may just be the right enhancement for you.

The Only Shading That Makes You Glow

Though it’s called shading, the treatment will give you a natural glow once your eyebrows are perfectly shaped and defined. Microshading creates a soft, powdered effect that resembles eyebrow powder that’s why it’s also called powder brows. Some say it’s a softer, gentler version of microblading. 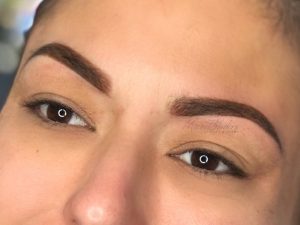 However, when done by machine, it can also create the effect of bolder, filled eyebrows, often called the “Instagram Brow”, which is perfect for those who love the look of makeup. Microblading uses micro needles to create hairlike strokes in the brow area. Because it involves depositing pigment under the skin, it often does not work very well if your skin is prone to being oily. If you perspire often and heavily, the microbladed pigment will fade faster.   Here at MicroBladers Studio + Academy, your artist will discuss your skin type prior to your treatment. This will help them recommend your best option and if other enhancements such as microfeathering or ombre brows are more suited for you.

A Small Tweak for the Same Natural-Looking Result 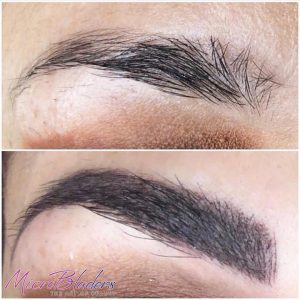 Though the results from the two enhancements look slightly different, they both look stunningly NATURAL compared to tattooed brows. Microshading gives your brows a shadow or gradient appearance using small pinpoint dots instead of the hairlike strokes used in microblading. The technique uses either an electric hand tool called a rotary tool or a manual tool to create the repetitive dots of pigment. Your artist will use the specialized machine with acupuncture-like needles to emulate a softer but fuller finish. This is why microshading is perfect for those with thinning or sparse eyebrows. It’s also great for individuals who have over plucked their brows and can no longer grow their hair back.

In some cases, a combination of the two is the perfect solution. A combo is recommended for those with drier skin. At MicroBladers Studio, you can get the microblading and microshading combo with just a slight difference in price.

Both microblading and microshading are considered semi-permanent makeup. However, microshading actually has a longer lasting effect. Microshading allows your powder brow look to last longer in between touchups compared to microblading which may require a more frequent maintenance schedule. Microshading brings all good news for those with sensitive and oily skin. Come in for a free initial consultation to discuss your options.
Share Tweet Share Pin